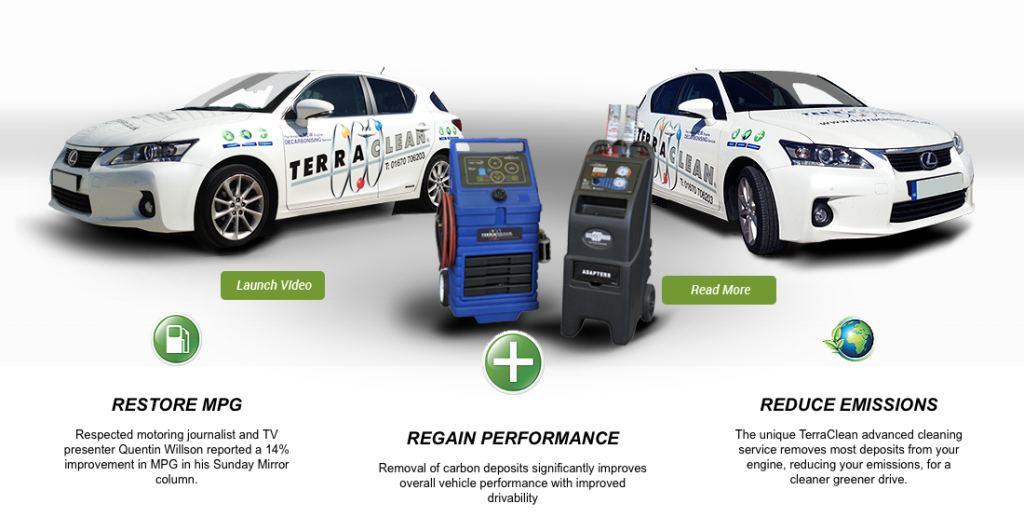 TerraClean is the only service that has two stages of cleaning, the first stage cleans the injection system and inlet valves (manifold injection only) which restores functionality to injectors and fuel pressure regulator resulting in improved fuel pressure, timing and atomisation. On manifold injected engines it cleans inlet valves and ports of sticky deposits allowing improved flow of fuel vapour into the engine. This all results in cleaner fuel burn reducing the presence of Hydrocarbons caused by unburnt fuel in the exhaust gassed. The second stage of the process is where the science begins, using aliphatic only fuel, this fuel while passing through the TerraClean machine goes through a process called columbic fractionation, and it is given a passive negative electrical charge, this breaks down the molecular structure of the fuel even further turning it from a liquid to a vapour and as the carbon in the combustion chambers, exhaust, cat and lambda sensors has a natural positive electrical charge the fuel and subsequent exhaust gasses are attracted to it this then turns the carbon into carbon dioxide which exits through the exhaust tail pipe, the end result is cleaner combustion chambers, exhaust, cats and lambda sensors, this allows the ECU (The vehicle’s central processing unit) to react faster to fuel mixture changes and adjust fuel and ignition timing to suit. This levels you with an engine that is more efficient with better throttle response, runs smoother quieter and has improved emissions and mpg.

A standard Diesel TerraClean service will help to remove particles from your DPF as part of a preventative maintenance programme. But when the device is too blocked there is a specific tool within the TerraClean range to remove the accumulated particles. This service is available from almost all of our TerraClean Service Centres and mobile engineers. TerraClean engineers who carry our DPF cleans have our full technical support and that of our network and there is regular training specifically related to DPF technology available, to ensure they are highly competent is diagnosing problems and identifying the correct resolutions.

There are companies who will offer to remove the DPF, but it is illegal to remove it and use the vehicle on a public highway, the fines are high and subsequent replacement is expensive. Fitting a new DPF is expensive and cheaper aftermarket units are sub-standard and will develop blockages earlier than the vehicle manufacturer’s specification, so keeping the one you have healthy and clean is important.

DPF’s can become blocked with Ash and Oil which a standard TerraClean service will not remove. There are “off-vehicle” solutions which will remove oil and ash from otherwise heathy DPFs. The whole TerraClean service centre network has access to this facility. This service involves removal of the DPF device from your vehicle for a few days whilst the unit is cleaned via a national service facility. With replacement DPFs costing up to £1000 for standard family vehicles and even more for higher specification vehicles the ability to investigate cleaning options is extremely worthwhile.